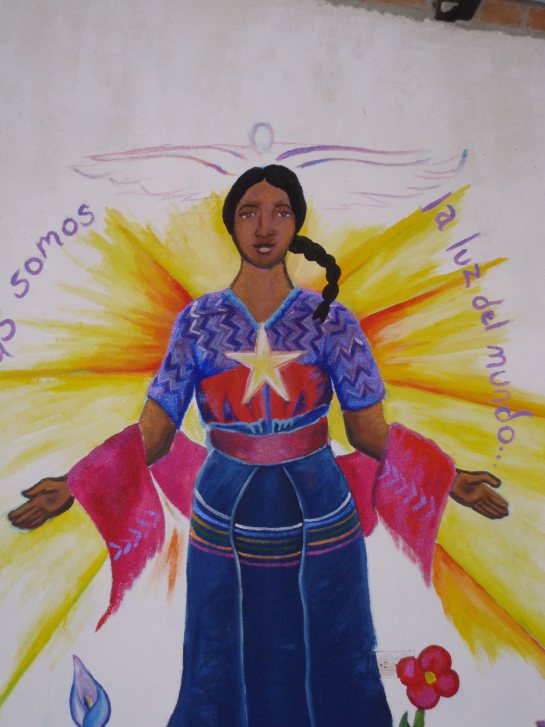 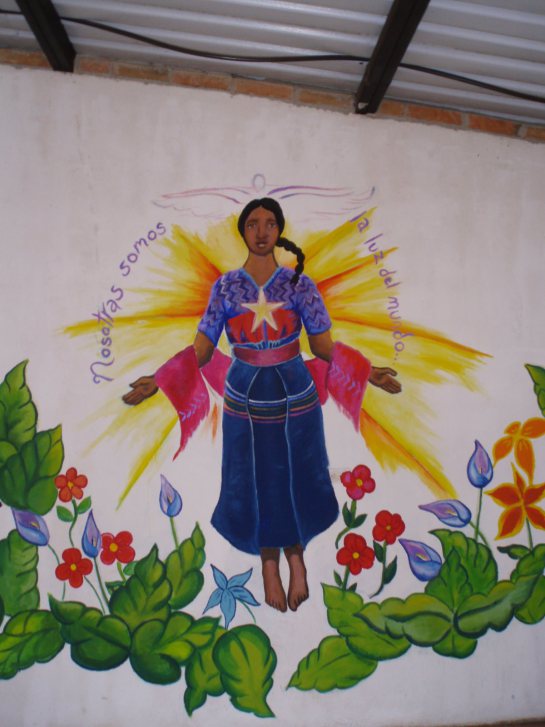 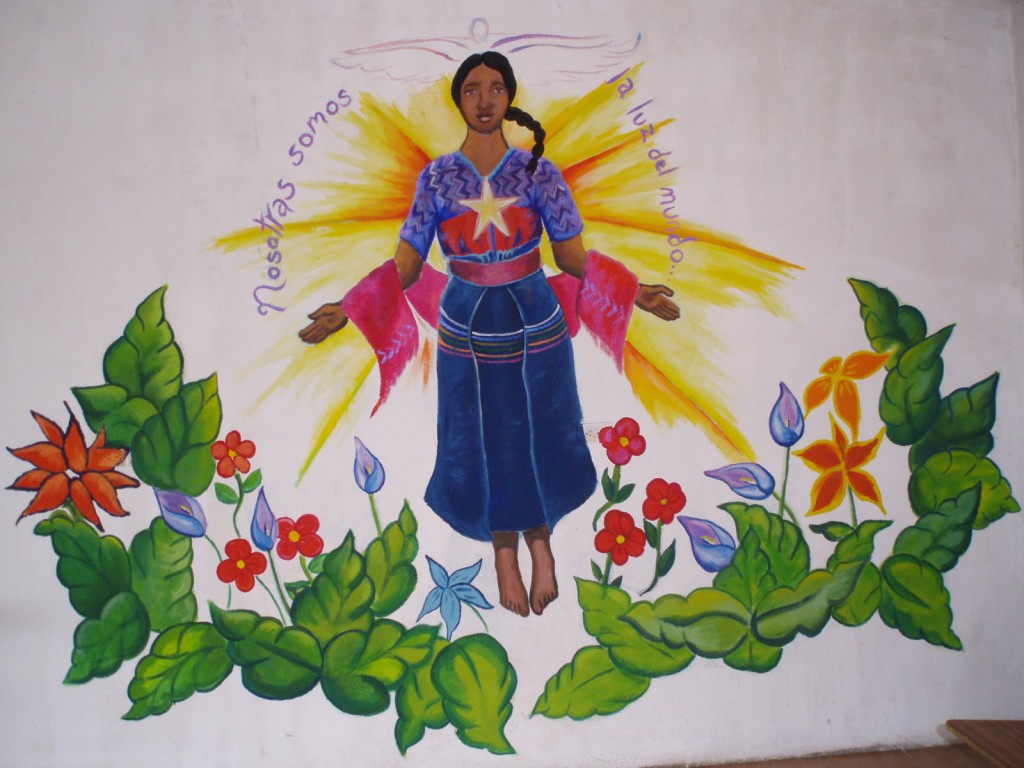 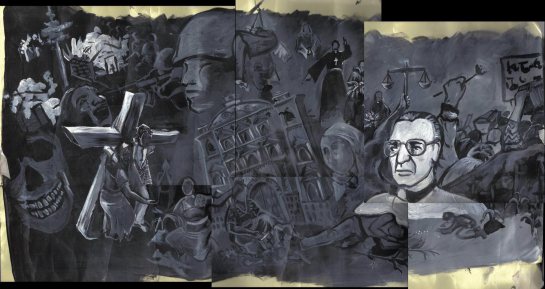 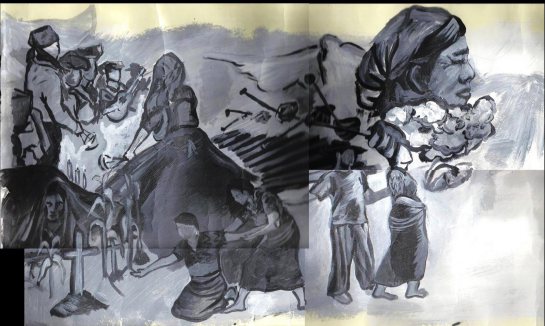 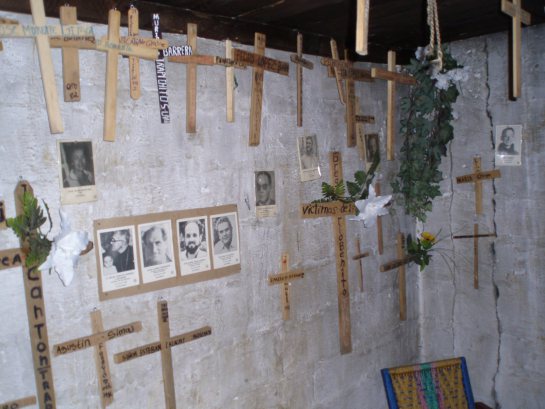 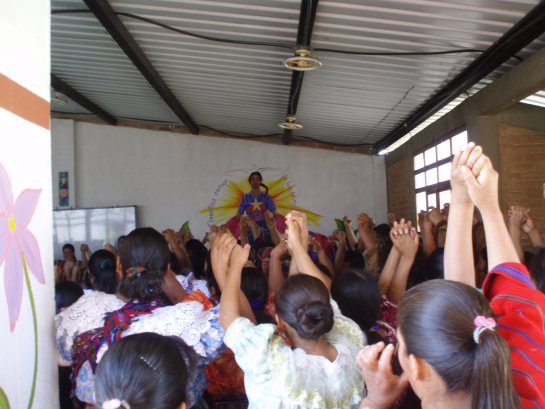 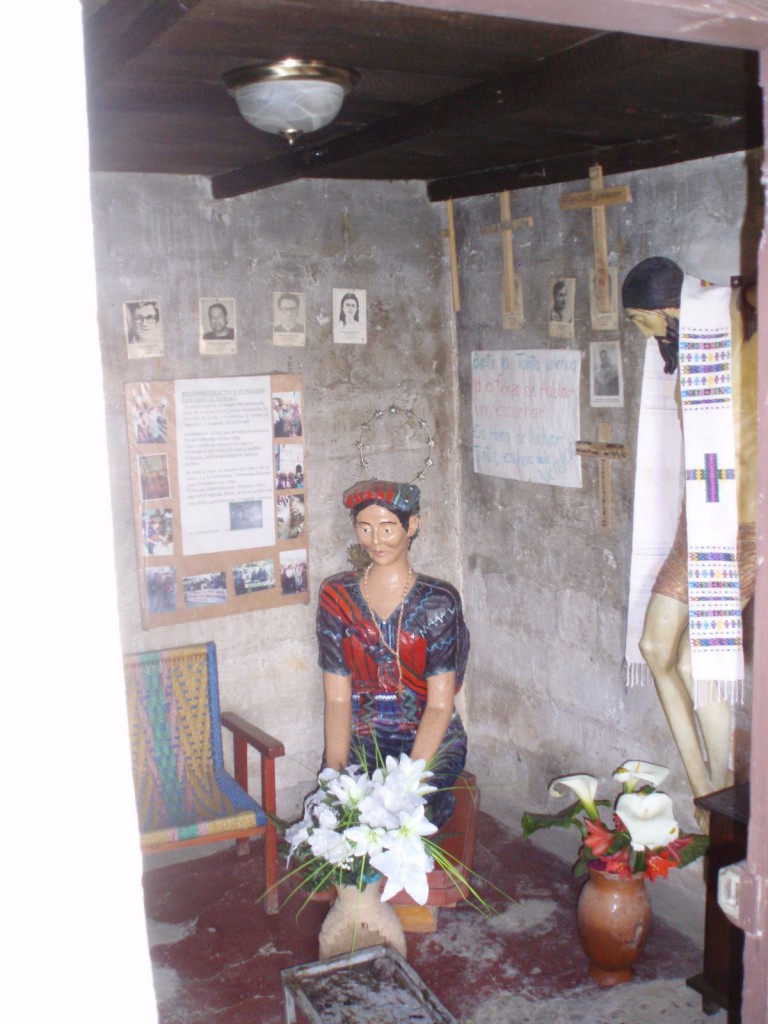 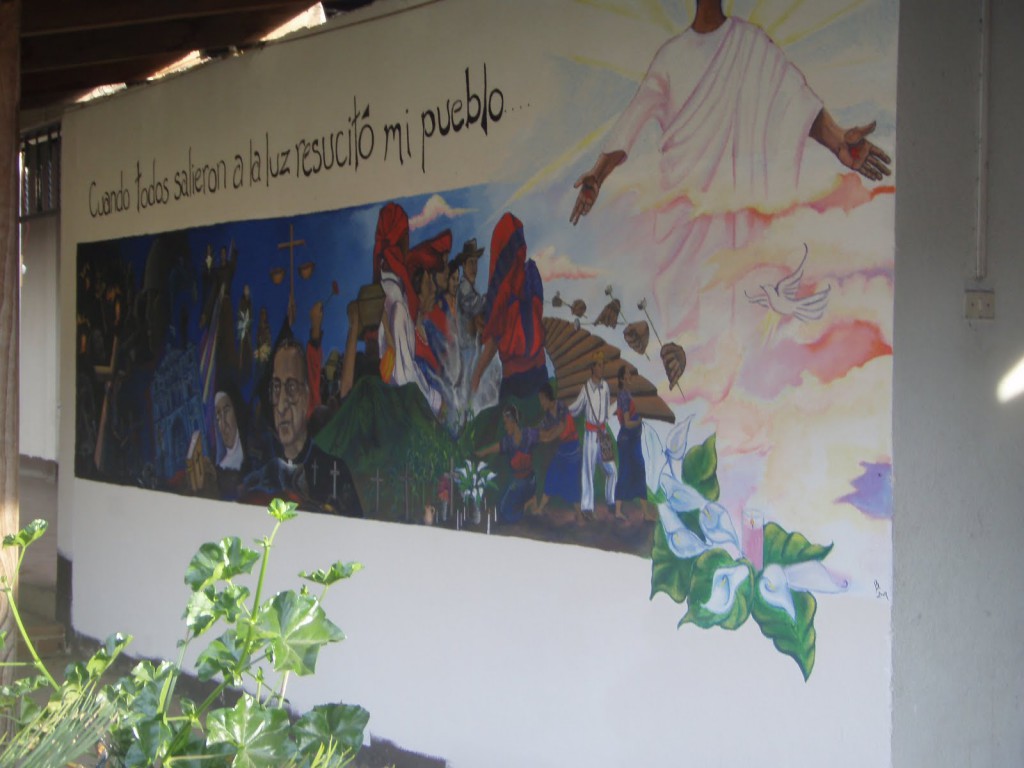 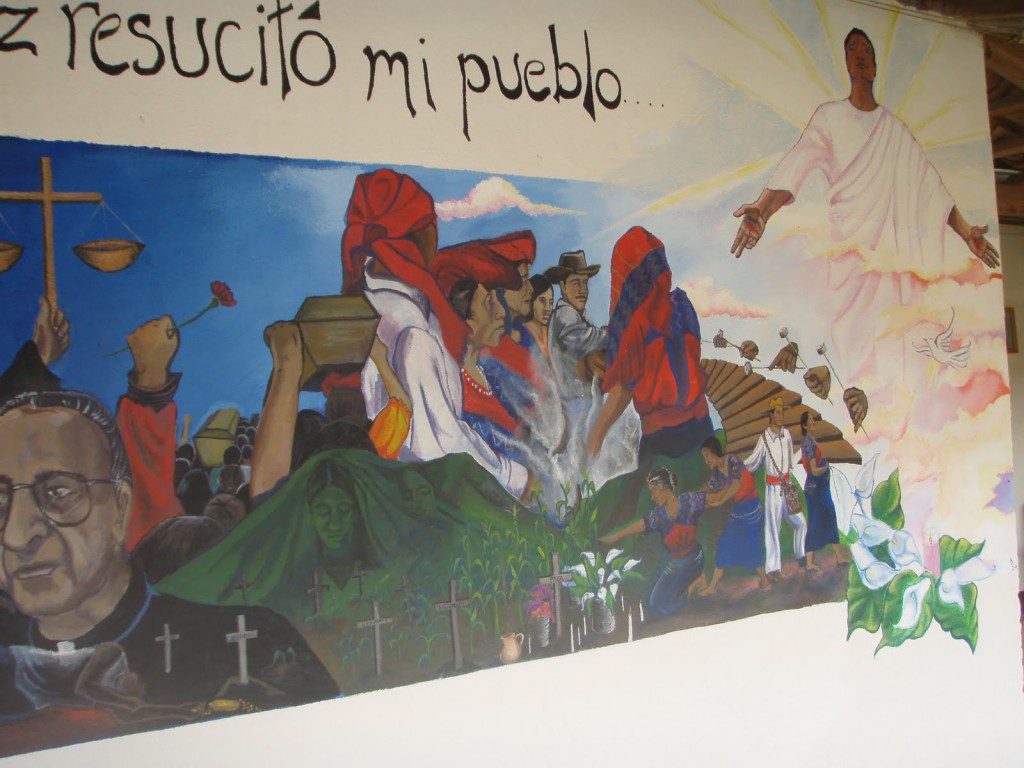 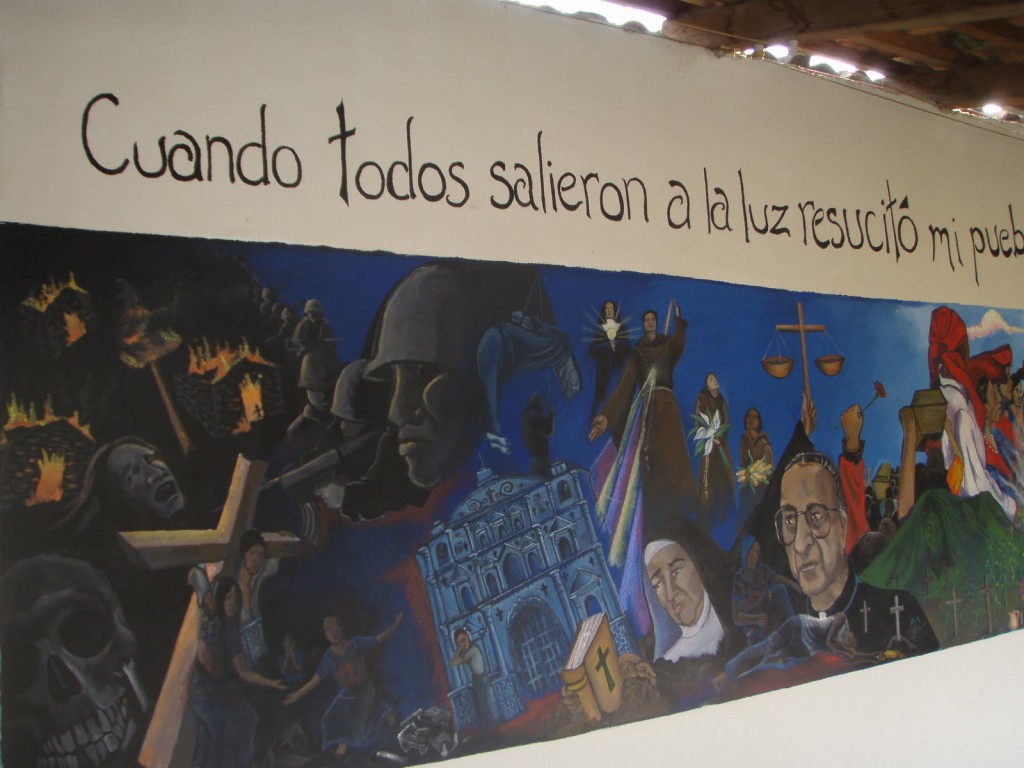 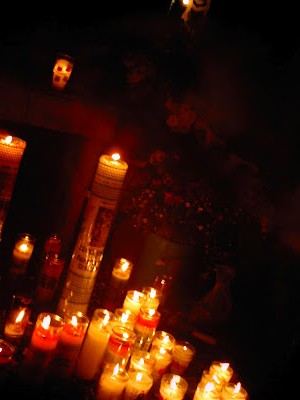 This mural was placed over what was formally a clandestine gravesite in a convent in rural Guatemala. 85% of this town was massacred during the US financed Rios Mont genocide campaign. The mural was created from an amalgamation of drawings created by the survivors of massacres in the area. Women worked together to share their testimony through collective sketches which then, under the guidance of community members who worked closely with the REHMI exhumation and testimony recording teams in years prior, were drafted into a final design.

The work itself speaks to the passion of Christ as a metaphor for the suffering and resurrection of the Mayan people in the region. Various sections of the mural speak to different aspects of the area’s experience of the conflict. As the church was taken over by the military during the Rios Montt era the friezes of pineapple which usually adorn the outer façade of the church were replaced by crucifixes symbolizing the suffering of the people “interrogated” and disappeared within surrounded by images of the razing of local villages. The image of the hands burying the bible symbolizes the story of a community member who was sent by her father to break into the church and the bury the bible so it would not be desecrated by the descending soldiers. The hanging figure is a representation the torture largely carried out in the courtyard and the room adjacent to where the mural was placed.

The mural proceeds to a portrait of the sister who founded the order of the Franciscan sisters of San Antonio upholding the scales of justice as well as an image of St. Francis pointing to the fallen church symbolically issuing his famous edict “repair my church.” In this case the church referred to is as much the destroyed church of Zacualpa as well as the inner temple of every person within which the divine spirit is housed. To the right, two Franciscan friars, one of indigenous origin and one of Spanish origin who hold sacred flowers and corn. In the center of the mural is an image of Monsenor Gerardi who spearheaded the work of REHMI and was martyred in his home April 26 1998. Gerardi was deeply involved in the movements of truth and justice following the armed conflict which resulted in movements to provide “entierros dignos” or dignified burials of remains exhumed from mass graves as pictured by the depiction of Zacualpa residents carrying their relatives’ remains in small caskets in the traditional style on their heads for a proper ceremonial burial in the munincipal cemetery. Featured to the right of the burials stand the portrait of Maria and Santos Tzoc, two Mayan widows, who worked and organized actively for Mayan families to step forward and share their testimony with the department tribunals during the UN truth commission’s presence.

In the foreground of the mural the progression of healing is represented by a grieving widow surrounded by corn kernels at a traditional Mayan burial to a family expecting a new child moving towards a sunrise filled with a resurrected Mayan Christ. In the last section of the mural a hands play the marimba referencing the testimony from a razed village whose inhabitants went into hiding for days in the forest. Upon emerging and reuniting a village elder began playing a small marimba he had hidden in his pouch. “Grandfather” they asked “Why are you playing music on such a terrible day?” He responded, without ceasing to play “So our hearts won’t grow cold with fear.”