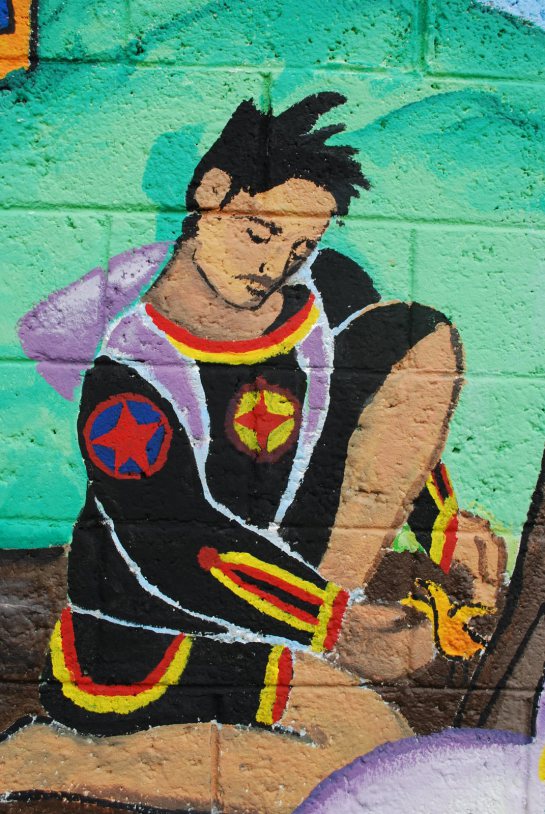 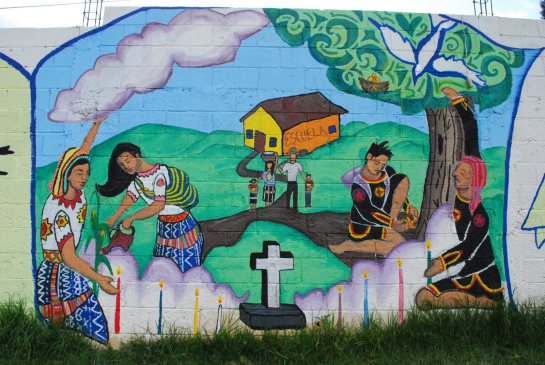 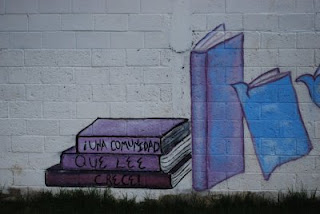 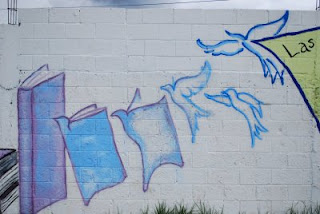 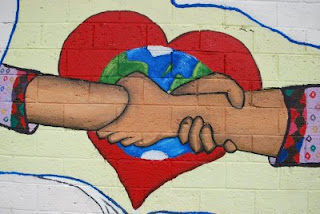 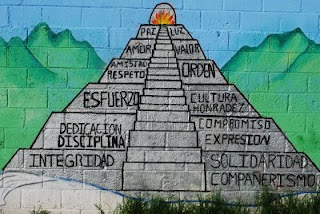 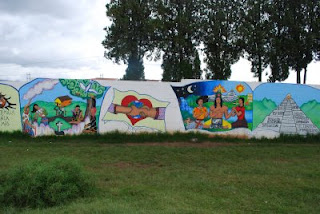 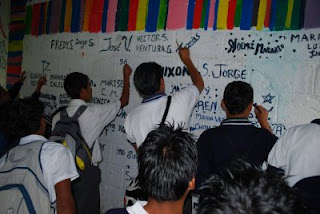 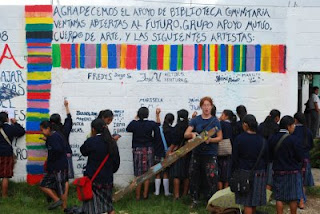 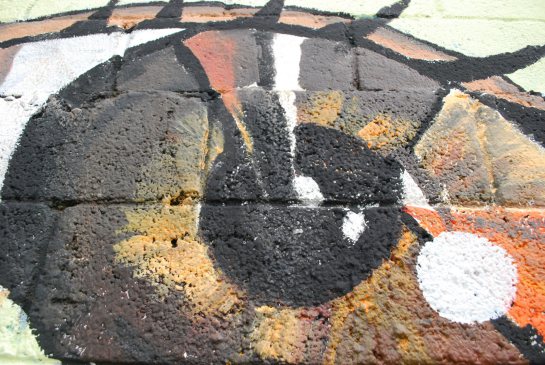 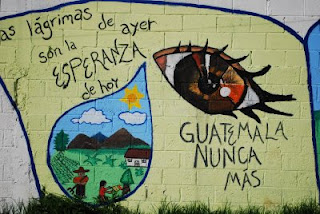 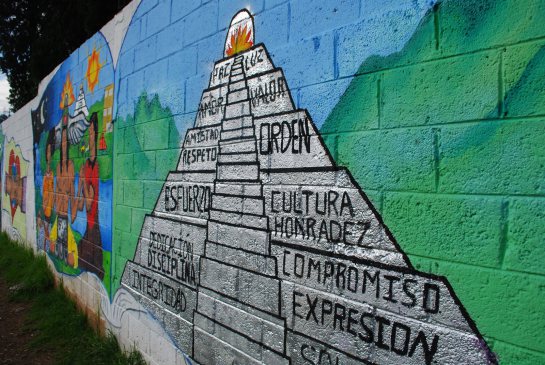 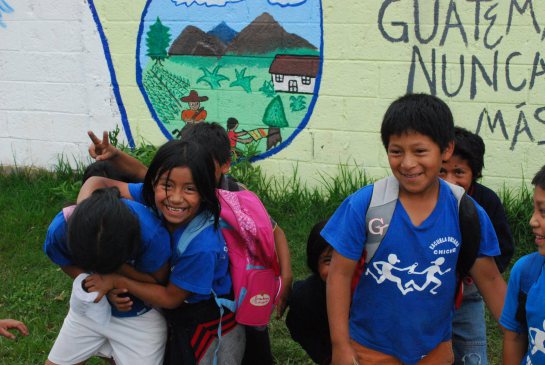 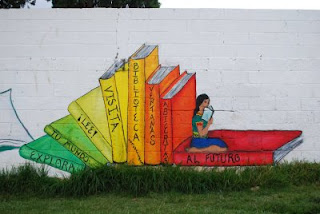 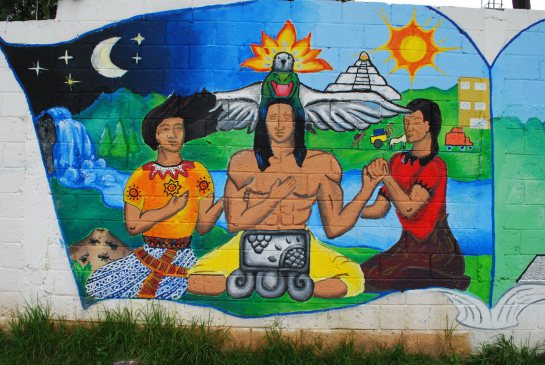 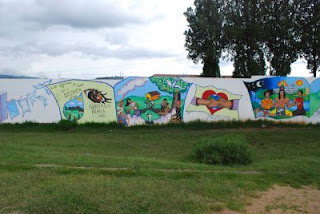 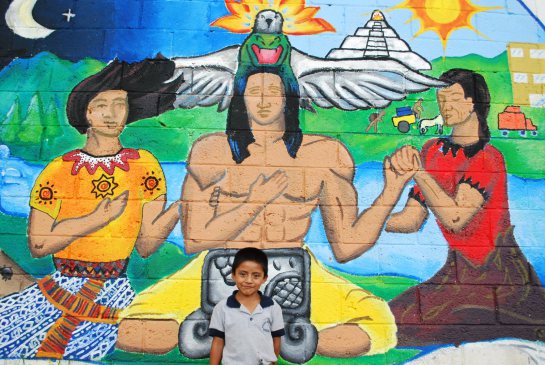 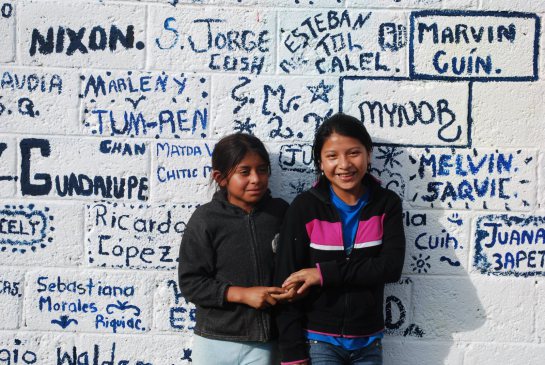 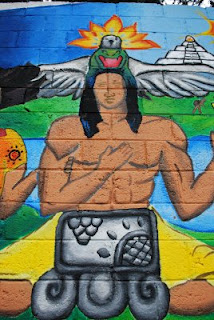 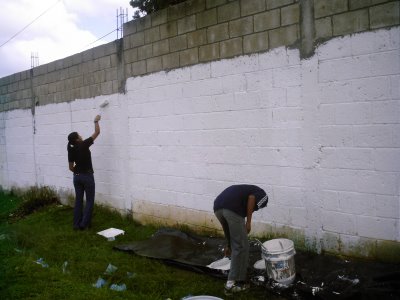 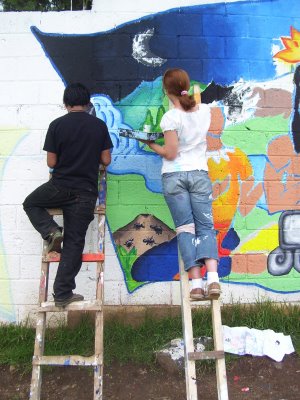 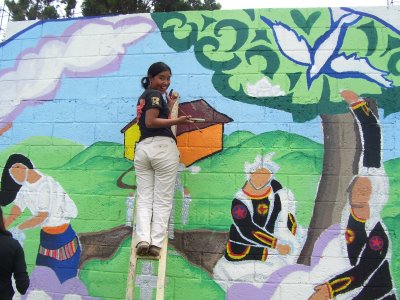 Sixty four students, ages 14 to 18, from Chiche, Guatemala designed this mural working in small teams under the sponsorship of the local library and the Escuela Urbana. These students addressed the topics of indigenous pride, true multicultural education, linguistic survival, and historic memory, as detailed below.

The mural begins on the far right with an image of a young woman kneeling while reading atop a stack of magical books that spill over into a series of what appear to be open volumes encasing the students’ designs. This young woman is assuming the traditional posture of a woman selling goods in the market. The first mural shows a traditional Mayan pyramid wherein the values of integrity, dedication, discipline, effort, respect, friendship, love, peace, light, courage, order, culture, honor, commitment, expression, solidarity, and fellowship are written on the 7 steps of the pyramid, representing the 7 levels of development necessary to reach the Mayan paradise, represented by the flame at the last step. Immediately to the left stands a second mural, depicting the flow of wisdom represented by the nahual of N’oj at the feet of a Mayan prince. The prince is an incarnation of wisdom from the heart of the earth, represented by the snake, and the heart of the sky represented by the bird. The prince is flanked by pairs of opposites: day and night, nature and civilization, one grandmother and one maiden. In the upper right hand corner is the scene of the forward progression of time from the pre-Columbian era of burdens carried by head strap, to the colonial era of horse driven carts, to modern vehicles. This mural is followed by a simple depiction of two hands wearing indigenous costume embracing in solidarity. To the left of this design is a complex image of a man and a woman in traditional costume conducting a Mayan ceremony. The ceremony is honoring the efforts to create an educational system that truly represents indigenous values, after generations of educational systems that actively sought to obliterate Mayan languages and values. The young woman represents taking care of sacred corn. The young man is helping a fallen bird back into the nest, restoring harmony with the natural world. Behind this scene is the image of campesinos walking their children home symbolizing an educational system accessible to all sectors of society.

The following mural is a design that was heavily contested by the surrounding community. The ladino (white Spanish descended) objected to images depicting the story of the indigenous genocide that occurred within the town itself. To depict this situation, the students settled on the image of a weeping eye within whose teardrop encloses a lost way of life. The text translates to say “The tears of yesterday are the hope of today” while “Guatemala Nunca Más” – meaning “Guatemala never again” – references a report published by the Interdiocesan Project Recovery of Historical Memory (REMHI). Under the leadership of Archbishop Gerardi, a REMHI report proved and documented that genocide did indeed occur in Guatemala. Two days before the publication of this report, Monsenor Gerardi, a beloved popular leader, was murdered in his home. The report and the killing helped inspire a UN led commission, which confirmed the commission’s finding more than 200,000 people murdered between 1960 and 1996, and an additional 45,000 who had disappeared. The commission found that in the four most violent regions, “agents of the state committed acts of genocide against groups of Mayan people.” (Guatemala: Nunca Más Report Has 14th Birthday by Allendria Brunjes, 24 April 2012.)

The last section of the mural shows a bird transforming into a book and leading to the 64 signatures of the participating 64 student artists and collaborating organizations.