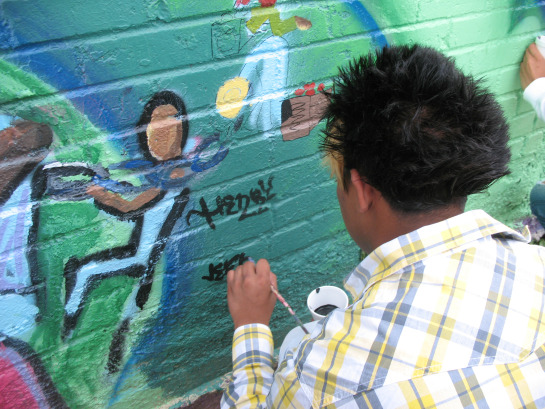 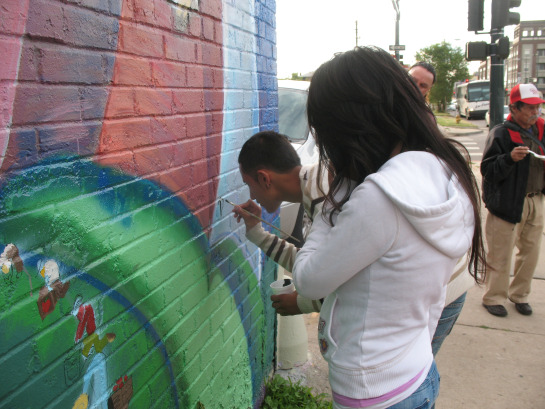 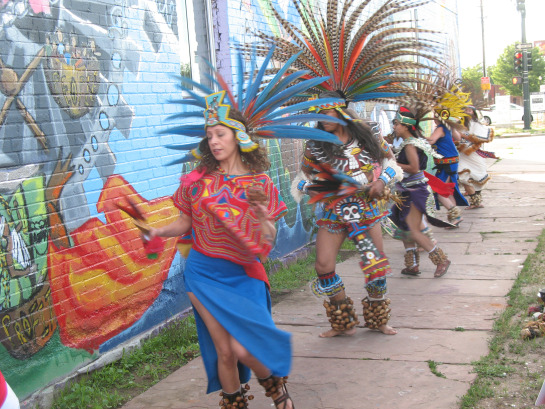 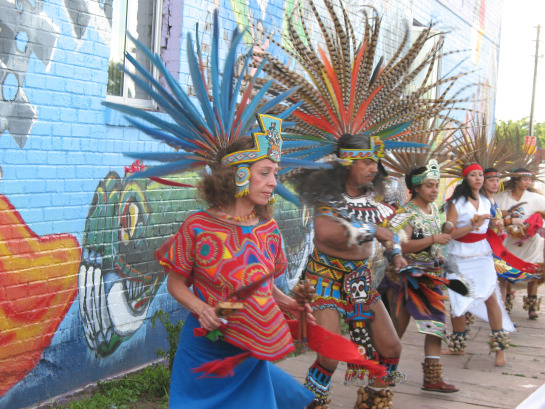 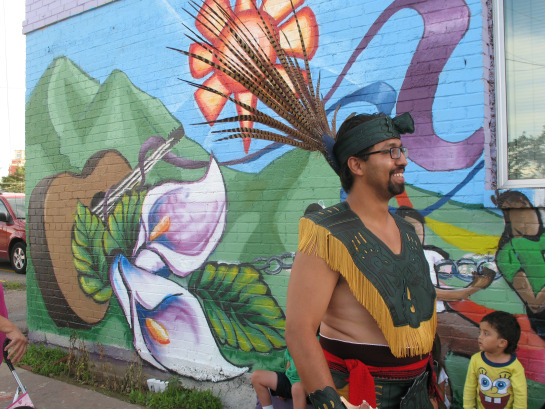 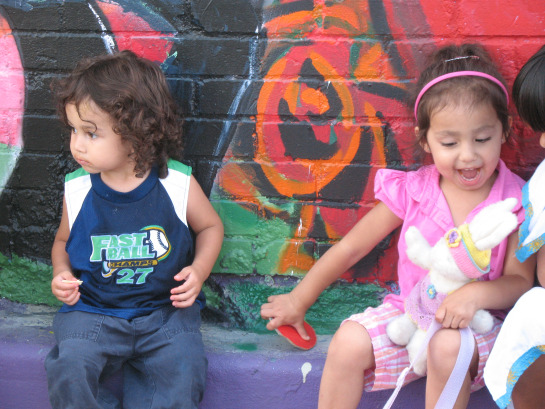 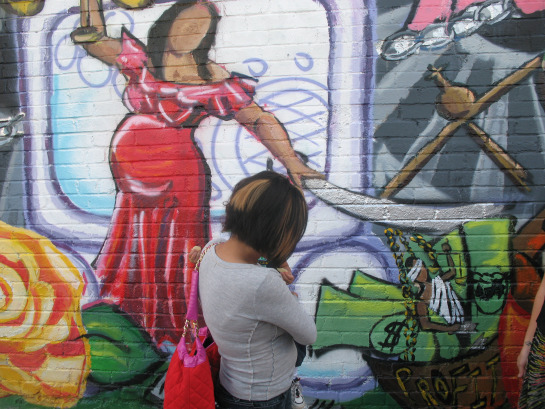 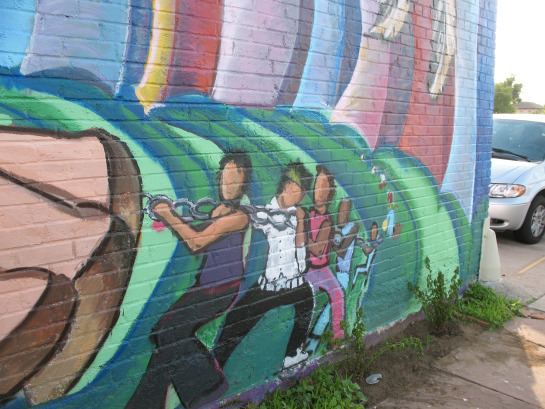 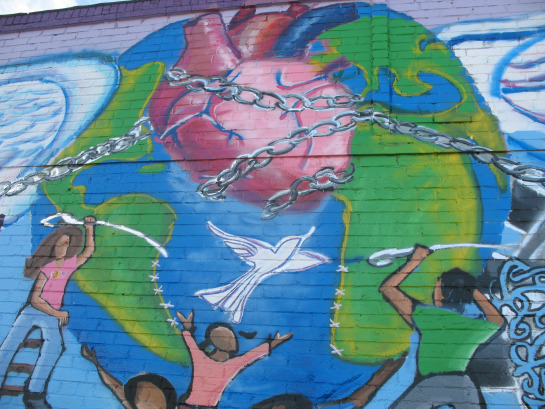 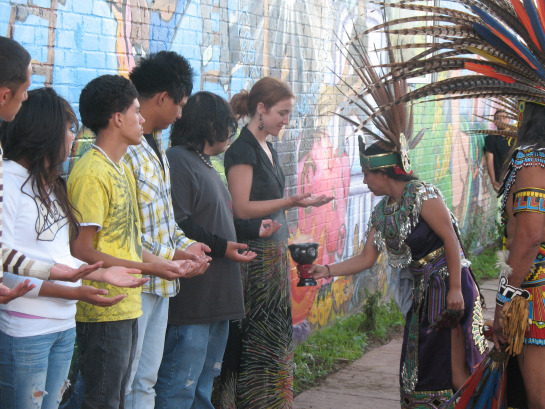 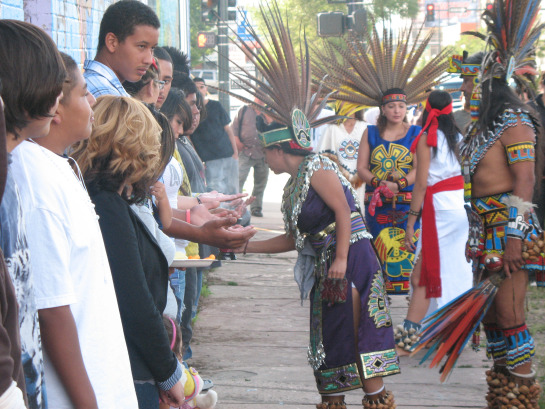 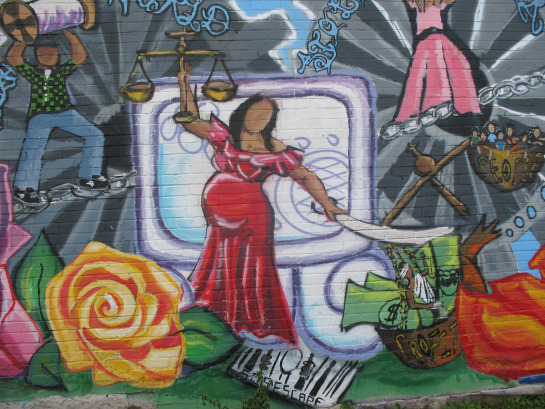 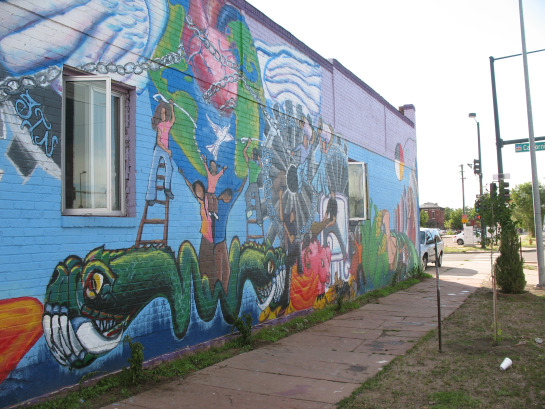 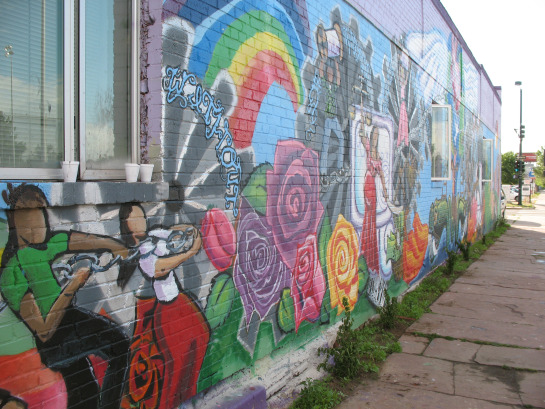 This video and slides detail a mural painted by students of Escuela Tlatelolco in conjunction with undocumented day laborers on the Northern wall of El Centro Humanitario off Park Avenue between California and Welton streets. The mural speaks to the reality, dignity, and indigenous ancestry the greater Latino community. Interviews with day laborers resulted in student sketches that then provided the basis of the design. The final collaborative piece displays a migrant family on top of Incan serpents lifting up the weight of the world with the help of the community members. The community holds chains connected to migrant workers in the fields on the western side and a guitar surrounded by calla lillies to the east. Young people stitch the continents of the world together with thread from spools positioned laterally representative of collective efforts towards healing and reconciliation, further symbolized by the child releasing a dove with joyfully outstretched arms from atop his parents’ shoulders. Above, an anatomical heart wrapped in chains forms the centerpiece of the mural which came from a student’s father who, while detained and awaiting deportation, sent his son the design stating “everyone has the same heart and wants to do good and be free but we are chained by money, nationality, and circumstance.” This idea is further developed in the lower part of the mural wherein the fire coming from the serpents’ mouths burn a scale of injustice and a piggy bank denies help to a starving man. Two figures work to smash the piggy bank: one with a paintbrush signifying creativity and the other with a gavel signifying just legislation. On the other side a pregnant woman holds up the scales of justice and strikes down the unbalanced scale that favors money over human beings. Behind the work gears turn upon which the words “Sin nosotros el mundo se detiene/ Without us the world stops turning” speaking to the millions of workers who make society run without recognition. Throughout the mural students placed symbols of freedom (the pair of large white wings) and happiness (the rainbow) and painted their own likenesses onto the characters on the wall. Throughout symbols of the students’ indigenous ancestry are visible: the Aztec symbol of the four directions above the guitar, the Native American four directions above the Denver skyline, the Incan serpents, and Mayan nahual. Each student adopted one of the characters in the mural to identify their part in the greater struggle the mural symbolizes and signed their name by the figures while taking part in a traditional Aztec blessing ceremony.